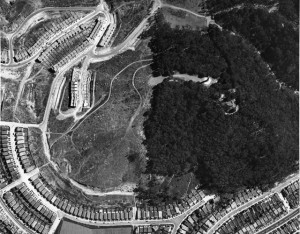 1948 Aerial View of Miraloma Park on the slopes of Mt. Davidson.

Miraloma Park was planned to become a “City in Itself,” a “suburban home center wherein they could use economics of mass production, thus bringing home ownership within the average means.” The neighborhood was developed from 1926 through the 1950s, largely by the Meyer Brothers: Theodore Meyer, President, G.H. Winter, Secretary, and Dewey Blade, Sales Manager, who purchased 350 single family home sites from the Sutro estate (North of Tract E). Another “1,650 sites from Wells Fargo & Company (including Stanford Heights once owned by Leland Stanford) and from individual owners as far away as France,” over a total of 208 acres. Their master plan of one-story over-garage homes with individualized designs in a suburban setting was the largest yet in San Francisco.

Development of a new water system for San Francisco after the 1906 earthquake included the new Stanford Heights Reservoir (elevation 618 feet) on the otherwise undeveloped northeast slope of Mount Davidson in 1926. First houses constructed for Miraloma Park subdivision on the far right. 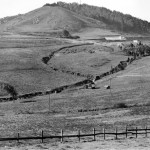 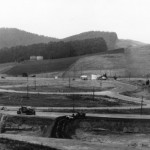 Close-up of picture below showing initial entrance to Miraloma Park from Portola Drive with Lake Laguna in the distance. The first survey map, filed on April 26, 1926, was done by the engineering firm, Punnett, Perez, & Hutchinson. John M. Punnett did the original Residential Development Co. map for A.S. Baldwin in 1914 and the street layout for Westwood Park.) 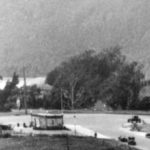 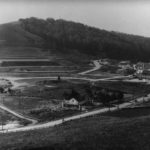 Miraloma Park was landmarked by a large painted rock letters on the eastern slope of Mount Davidson instead of the grand entrance gates and fountains of earlier subdivisions. The third and first lit Mount Davidson Cross built on the summit is visible. It was 75 feet high with 300 lights.

The design of Miraloma Park incorporated City Beautiful Movement features, “streets wide and curved to take full advantage of the contours of the property. Easements were planned to go along the rear of each home so there would be no unsightly power poles on the street,” to take advantage of the panoramic views. Miraloma Park Advertisements promoted the landscaped front yards and deep back yards as a greenbelt for “urban farmers and gardeners.” 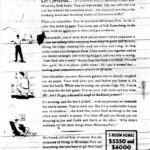 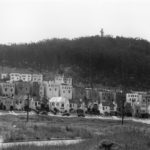 San Francisco Chronicle: in 1926 “Fifth construction unit of 19 homes valued at $160,000 begun in May; Latest Type Homes; Combines City, Country; Miraloma Park is far more quiet and restful than I had imagined anything so close to San Francisco could be. The wooded slopes of Mt. Davidson add a great deal to the beauty of the rural setting…Within 30 days construction will start on 30 additional homes and street work will be completed on the major portion of the 26 acre unit to be developed.”

Meyer Brothers marketed the quiet open space of Miraloma Park, along with furnished units designed by Ruth Rowe to bring buyers out to see and buy in this 1927 advertisement. “You will want to see the Kohler electric dishwasher and the radio den in the ‘Raleigh’..the charming design and the beautiful furnishings of the Spanish ‘Miraloma’…and the compact convenience of ‘Sunshine Gables’ and the ‘Portola’.” ” ‘The Raleigh,’ a home typical of medieval English architecture, is one of the four residences now on exhibition at Miraloma Park, developed and owned by Meyer Bros. The home exhibition is being conducted purely as an educational feature and will be held for the next month.” Miraloma Park along Portola Drive seen above in the 1930s. 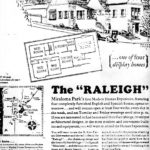 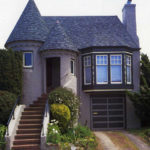 The neighborhood features Period Revival Style architecture. This rare and whimsical Storybook Style home on Juanita has a double turret. The right turret forms a porch complete with a window, while the left one encloses an entry hall.

Home sales slowed during the Depression. Neighborhood historian, Rosalie Kuwatch, interviewed longtime resident Arthur Roller, who said that existing homeowners who lost their jobs managed to keep their house under a federal agency which extended mortgage payments and allowed them to be paid off at a lower monthly rate. One man on Rockdale Drive did not suffer a loss of income, though, as he ran a still in the basement to make whisky during Prohibition. His gas line was connected ahead of the meter, but P.G.&E. had a monitoring device, which showed an unusual increase in gas use every night. It was traced to the bootlegger’s house. The police broke up the still and dumped the mash in the backyard. 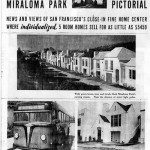 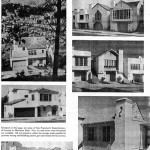 Residents organized the Miraloma Park Improvement Club and one of their first projects was getting public transportation to the neighborhood. Mayor Rossi piloted the first 36 bus from Forest Hill station on July 23, 1939. The occasion was celebrated with a big parade of American Legionnaires, Boy Scouts, and school bands at the business district on Portola Drive.

Rosalie Kuwatch writes, “Very early the Improvement Club was aware of the need for a school. At the March 19, 1936 meeting of the Club it was discussed. A committee was formed and its successful petition resulted in a school of temporary wooden buildings that opened in 1940. The children had to go outside to the bathrooms and evening programs had to be held outside, as seen here in this 1946 Halloween event. In the late 1940’s, the bungalows being heated with wood burning stoves, were considered shacks by the parents. (Courtesy Bertha Jones.) 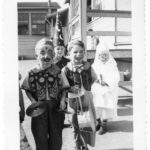 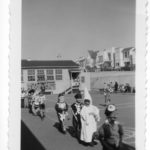 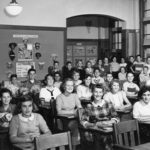 They conducted a house-to-house count of the number of children in the neighborhood and petitioned the school district for construction of a permanent Miraloma Elementary School. The Improvement Club and parents have always been in active support of the school. They organized parent groups to build playground equipment and parents helped to maintain it. Many fund-raising events held by the Club have had proceeds split with the school.” Halloween celebration on what is now Miraloma Playground in 1947. (Courtesy Bertha Jones.) Before 1951, neighborhood children were transferred to West Portal Elementary School for fifth and sixth grade. (Courtesy Jeanne Davis MacKenzie.)

The first homes built in Miraloma Park were detached and built adjacent to the firehouse on Marne Avenue and Portola Drive. Building progressed east along Portola Dr. and Juanita Way, then down Teresita Blvd. to Reposa. To keep selling houses at 1920s prices during the Great Depression, the lots became smaller and the houses were no longer detached as they progressed down Teresita toward Monterey Blvd. The view side of the street was developed first and Streamline Moderne architecture was added to designs for sale. (Courtesy Larribeau Family.) 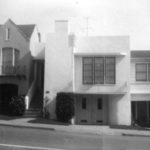 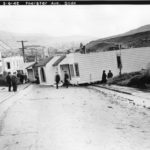 Living on the City’s highest hill can have a downfall as shown when this house on Forester Avenue slid off its foundation in 1942 after a rainy winter and nearby road construction. A river of mud buried the 700 block of Foerster Street, trapping residents in their homes and killing Mrs. Dora Krammer. 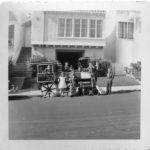 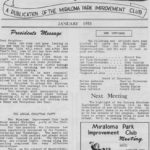 Despite the risks, developers are allowed to cut more streets into the slopes of Mount Davidson for housing. Marietta Drive from the backyard of a Teresita homeowner in 1958. Nine subdivisions had been approved for building by 1931 but the Depression slowed down their completion. When the government stopped all home building in 1942, Meyer Brothers was dissolved. In 1947, Miraloma Realty, created by Dewey Blade and Edward Anderson, who got the last two subdivisions approved in 1959 and 1960, resumed building of homes. (Courtesy Virginia Larribeau.) 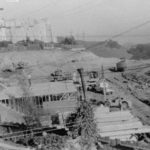 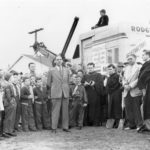 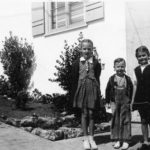 Groundbreaking for Miraloma Community Church in October 1950. Architect Stanley Fuller Davis A.I.A. in center, Rev. Leroy Nattress on the right, Dale Jones on the left, daughter Jeanne on the far left, Stanley Davis Jr. on the backhoe, Grandfather Herman Quast Jr. in hat, Mr. Sutton in sport jacket. Stanley Davis raised his family just down the block from the church he designed in the brand new home he bought at 2 Arroyo Way in 1941. Daughter Jeanne with friends Jeannie and Louise Clay. (Courtesy Jeanne Davis MacKenzie.) 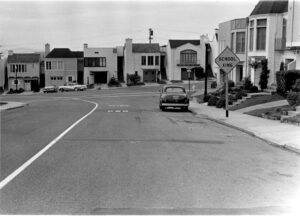 Teresita Blvd. at Bella Vista in 1951

Third generation San Franciscan Sally Grusser married Berlin born Gunnar Grusser, in 1939. An Olympic swimmer, he coached the Japanese swim team for the 1932 Olympics and won a trophy for his swim across the Golden Gate. He and Sally met in San Francisco where he worked for Schmidt Lithograph making can and wine bottle labels. After getting a job with the phone company, she moved to her brand new Miraloma Park home with husband Gunnar in 1940 (pictured far right, second row.) 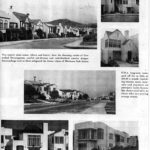 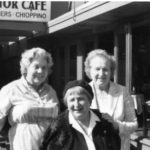 “This neighborhood has a reputation for being an enclave of stable, straight society in San Francisco. Most of its homes are detached and have well kept gardens out front. Some back onto the heavily forested slopes of Mt. Davidson, site of annual Easter morning religious services. Across the road is a small shopping center that caters to a gastronomically inclined clientele.” View of Tower Market and Miraloma Park in 1950. (Courtesy John Pommon.) 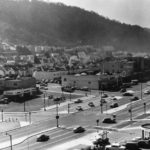 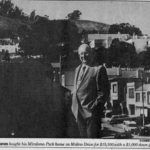 President of the Miraloma Park Improvement Club, Harry Walraven, and Miraloma Park is featured in the 1990 series by Bradley Inman on the most livable neighborhoods in the Bay Area. 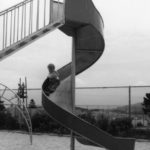 “Hard to believe, but true, that the best view in San Francisco is from the top of the kiddie slide at Miraloma Park, ” writes Steve Rubenstein for the San Francisco Chronicle in 2001. As demonstrated here by Aaron Proctor, “From this exalted perch two dozen steps above the sandbox on Omar Way, the visitor can gaze upon the ocean, the bay, the slopes of majestic Mount Davidson…”