Jacqueline Proctor, grew up in the suburbs of Southern California, and fell in love with San Francisco when visiting as a child. In 1980 she fulfilled a lifelong dream to move here, making a home ever since with her husband and son in Miraloma Park. As a non-native and professional city administrator, she especially appreciated the unique character and history of hers and other neighborhoods on the slopes of Mount Davidson in San Francisco’s West of Twin Peaks, the subject of this new book.

With a Master’s Degree in Public Administration and a 30-year career in public service, Jacqueline has written numerous articles for professional and historical journals, as well as, local newspapers. She is delighted by the opportunity to compile and edit this photographic history on behalf of these West of Twin Peaks neighborhoods. 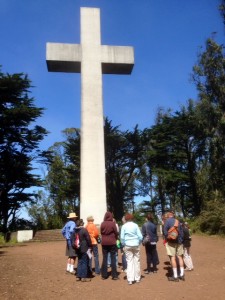 Jacqueline is an active community volunteer, having served on the board of the Miraloma Park Improvement Club and co-founded the Friends of Mount Davidson Conservancy. In addition to donating her time as an accreditation evaluator for the American Public Works Association, she is currently a volunteer San Francisco City Guide, giving free walking tours to Bay Area residents and visitors of South of Market Architecture, Mt. Davidson, and Westside Architecture.

She wrote this book as a tribute to Madie Brown, who in the 1920s worked to create the 38-acre open space oasis on San Francisco’s highest hill, Mount Davidson. Madie’s selfless dedication to community as well as that of many other residents celebrated in this book illustrate why these historic West of Twin Peaks neighborhoods are continuing to flourish into the 21st century.

Video of the history of the park: Mount Davidson: San Francisco’s Hidden Treasure.

Interview with the Author