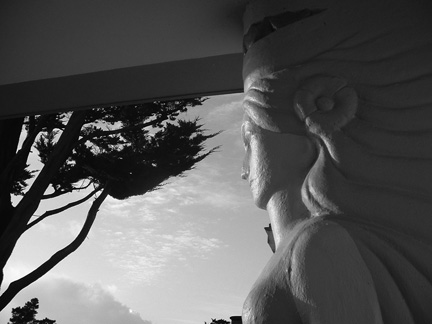 A City for All 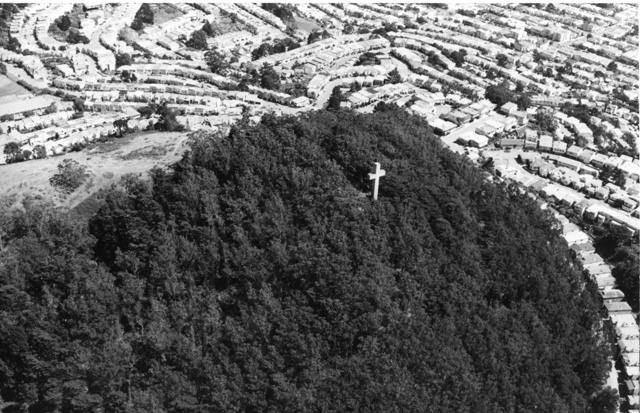 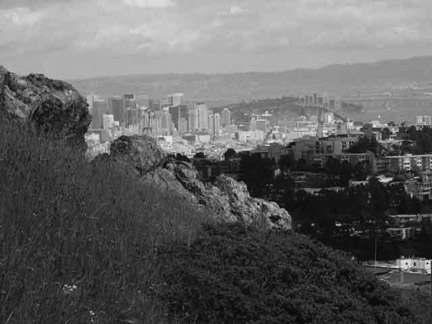 In the early 1960s, the rise in North Beach rents causes hipsters to move across the city to Haight-Ashbury, which became the headquarters of America’s “hippie movement.” The first lawsuit is filed accusing the San Francisco Unified School District of a policy of segregation in 1969. Students in West of Twin Peaks public schools are transferred to schools outside of their neighborhoods. Mayor Christopher and the City of San Francisco at the request of John McConnell initiated the first celebration called EARTH DAY, on March 21, 1970, the day of the vernal equinox. A housing revival movement in San Francisco leads to the National Endowment of the Arts sponsoring a survey of the city’s Victorian homes. At least 200,000 people marched through San Francisco in June 1977 on what was proclaimed as “Gay Freedom Day.” The same year, live television broadcast of the Mount Davidson Easter sunrise service begins. Proposition 13 passes in June 1978 after California Supreme Court rulings that a property tax based finance system for schools was unconstitutional. When Supervisor Harvey Milk and Mayor George Moscone are assassinated in 1978, CBS broadcasts the 1979 Mount Davidson Easter sunrise event nationally. In 1980, San Francisco was ranked as the nation’s most ethnically diverse large city. Political scientist, Richard DeLeon writes, “San Francisco’s progressivism is concerned with consumption more than production, residence more than workplace, meaning more than materialism, community empowerment more than class struggle. Its first priority is not revolution but protection – protection of the city’s environment, architectural heritage, neighborhoods, diversity, and overall quality of life from the radical transformations of turbulent American capitalism.” In 1994, the San Francisco Recreation and Park Department launched a campaign to remove up to 82% of non-native eucalyptus and monterey cypress trees on the top 10 acres of Mount Davidson Park.

Local hero, Kermit Kubitz, describes where he lives on the south side of Mount Davidson in 2007 as “a very quiet neighborhood where people can go out in their bathrobes or house coats to put out the trash.” (Pictures courtesy Denis Pinto, Ron Davis, and Ron Proctor.) 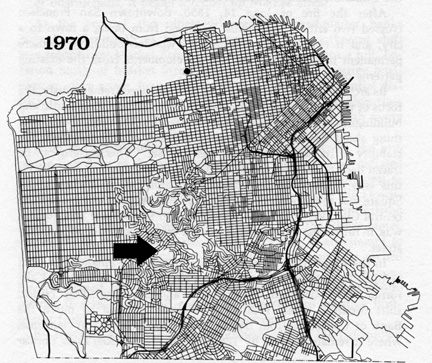 A.S. Baldwin’s vision for West of Twin Peaks “as the future of San Francisco,” is complete by 1970 with the nature preserve on Mount Davidson as its Daniel Burnham-inspired City Beautiful entrance. Mount Davidson Trail Map (Courtesy San Francisco Planning Department.)

Clean cut local high school kids, The Ridge Runners were surprised when they showed up at the first free San Francisco Examiner Midweek Jazz-Rock Concert sponsored by the San Francisco Youth Association in co-operation with the Recreation and Park Department. In front of them at the Golden Gate Park Bandshell was an unexpected audience of thousands there to see the headliner band, Sons of Champlain. The Ridge Runners, described as “one of the best of the Bay Area’s school based groups,” bravely played their set as planned, before giving the stage to Boz Scaggs and the Steve Miller Blues Band and witnessing first hand the birth of the hippie movement and the West Coast rock music renaissance. (Courtesy Dave Bisho.) 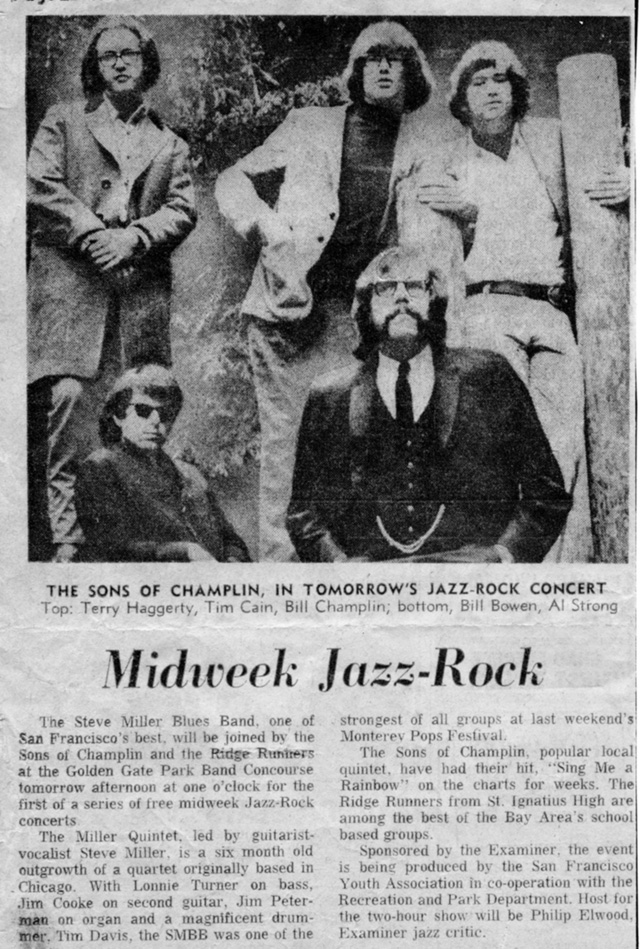 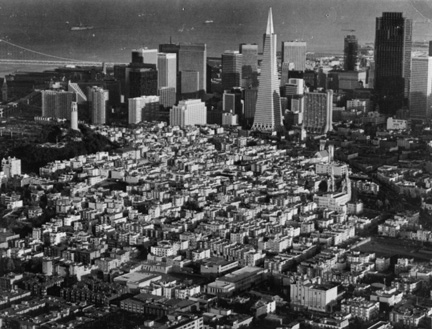 Henry J. Brunnier came to San Francisco from his native Iowa after the 1906 Earthquake to help rebuild the City’s devastated railway system when he was 26 years old. An outstanding soil and strata engineer, his preliminary work ensured the City’s highrises would not sink in San Francisco’s sandy soil, including the Shell, Mills, Standard Oil, 111 Sutter, Russ, Commercial Union, Crown Zellerbach, and Federal Reserve Buildings. His structural engineering expertise would continue taking San Francisco’s skyline to new heights, with the City’s tallest building to date in 1968, 800 feet and 55 stories for the Bank of America. (Courtesy Margie Whitnah.)

The 1970s brings Hollywood to Mt. Davidson for Streets of San Francisco. The night lit Mount Davidson Cross brings San Francisco native, Clint Eastwood, home in 1971 to fight Psycho Scorpio at its base in his first Dirty Harry film. Psycho to Harry, “Now turn, face the cross. Come on, put your nose right up against the cement.” Lighting is restricted to Christmas and Easter weeks in response to the 1976 energy crisis. (Author’s Collection.) 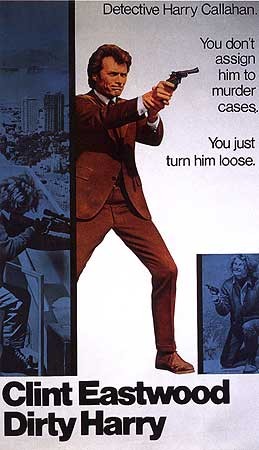 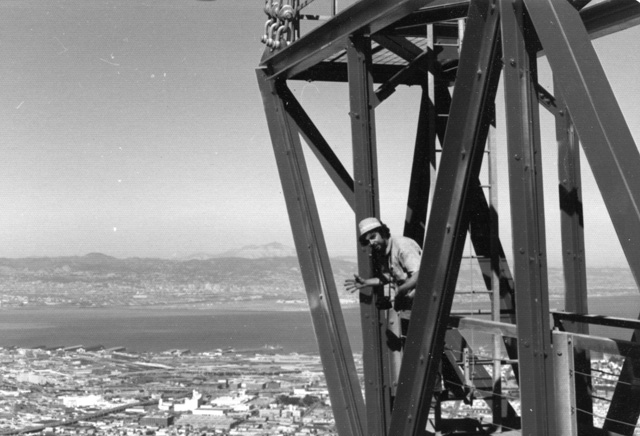 Fred Ulrich in 1971 atop the new 977 foot tall Sutro Tower built on the site of the mansion owned by the grandson of and peak named for Adolph Sutro with the east bay in the background. On the hill, Sutro had named Mount Parnassus, the new icon to broadcast media is nine times taller than the Mount Davidson Cross, becoming the most dominant landmark on San Francisco’s skyline. (Courtesy Ron Davis.)

Forty years after the West of Twin Peaks Central Council argued to prevent the building of gas stations, about 75 Sunnyside residents led by the “Mayor of Monterey Boulevard,” Ron Davis, protest the planned closure of a Chevron station, calling it part of a dying species of neighborhood businesses. Taking turns standing on a milk crate, speakers such as Supervisor Terence Hallinan said large chains are moving into small neighborhoods and chasing out mom-and-pop businesses. Small businesses near the neighborhood station consider it an essential anchor that attracts patrons for all. Hallinan, author of a law to prevent closure of gas stations, said that Chevron found a loophole in it. (Courtesy Ron Davis.) 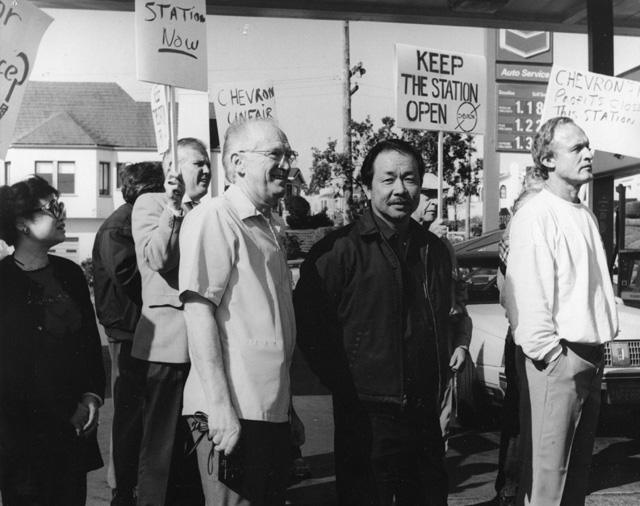 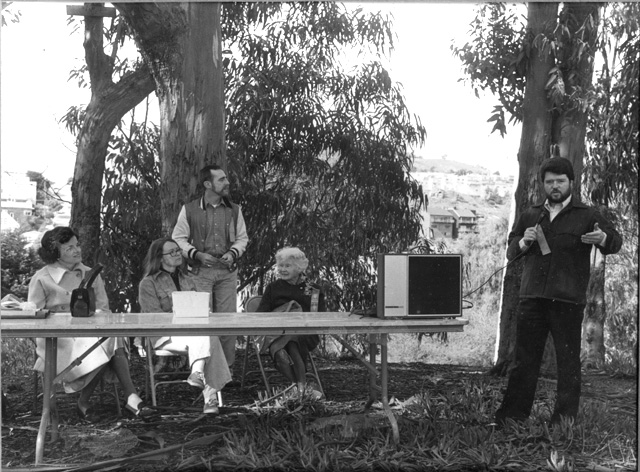 Dedication of Dorothy Erskine Park established for the founder of the Greenbelt Alliance on Martha’s Hill atop Baden Street in 1979 by the Sunnyside Neighborhood Association. From left to right is the first female Mayor of San Francisco, Dianne Feinstein, Mary Burns, Tom Malloy (Director of Parks and Recreation), Dorothy Erskine, and Ken Hoegger. 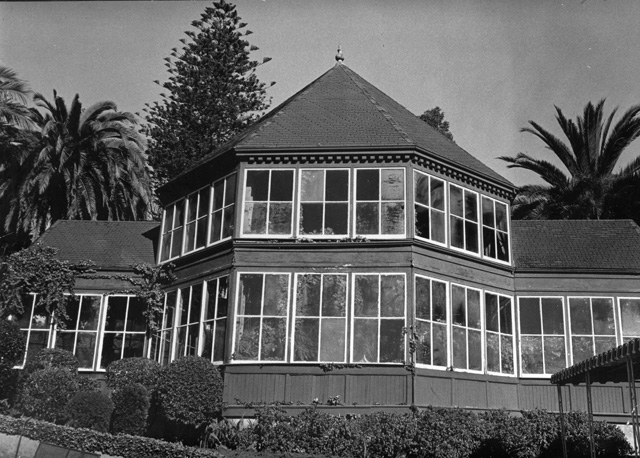 Doss’s attendance at the dedication of Dorothy Erskine Park leads to her influential support of the landmarking of the Sunnyside Conservatory in 1975, initiated by Thomas Malim, Ken Hoegger and Greg Gaar. The .19 acre conservatory site was purchased with money from the Open Space Fund for $226,000 in 1980. (Courtesy Ken and Kathy Hoegger.)

West of Twin Peaks neighborhoods offer multi-generational living as those who bought their homes in the 1930s and 40s remain to welcome young families. Bob and Virginia Larribeau who raised four boys in their Miraloma Park home admire the artwork of their next-door neighbor, Aaron Proctor, from his first day of pre-school. (Author’s Collection.) 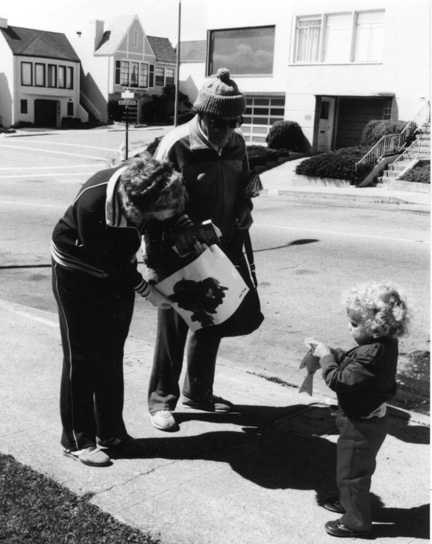 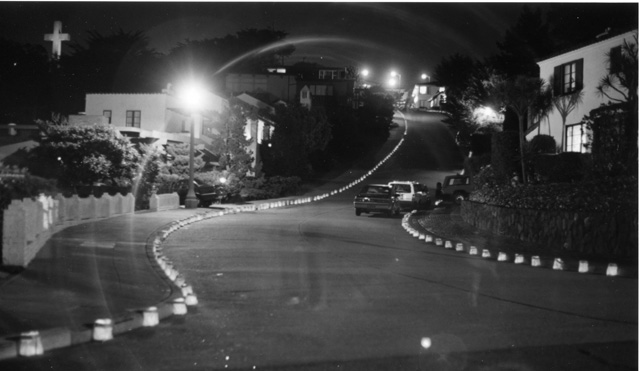 In 1991, the American Civil Liberties Union, American Jewish Congress, and Americans United for Separation of Church and State sue the City of San Francisco for removal of the Mount Davidson Cross from the public open space saved by Madie Brown. Leaders of the adjoining neighborhoods form the Friends of Mount Davidson Conservancy to ensure preservation of the park and historic monument in 1996. The Council of Armenian Organizations of Northern California become the new owners of the historic monument: http://www.youtube.com/watch?v=-zQH-Zk0Hew. Rainbow lit Easter eve celebration in 1998. The Cross is lit blue during the 2020 pandemic. (Courtesy Glenn Gullmes.) 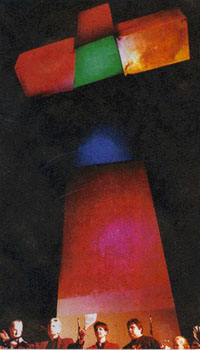 Dan and John Pommon with Tower Market staff in 1991, where Steve Rubenstein writes in the San Francisco Chronicle“a tomato tastes like a tomato and not a soggy tennis ball.” With Dan’s passing, locally owned Mollie Stone’s Markets came forward to preserve this West of Twin Peaks landmark in 2006, continuing its mission to provide old style hometown quality, selection, and service. (Courtesy John Pommon.) 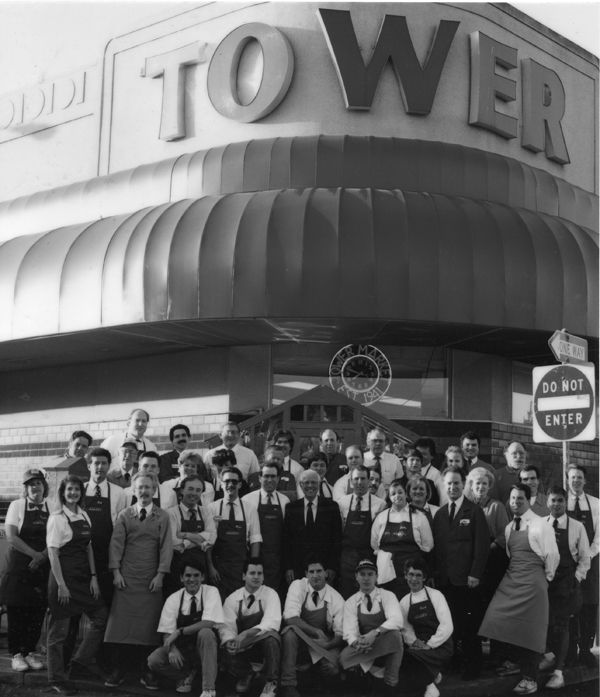 As legend has it, Miraloma Elementary School students still make their annual trip to see where the Easter Bunny lives behind a metal door at the top of the stairs near the Mount Davidson Cross. In the Spring of 2006, just before Easter, Adrienne Long, called her great Aunt Diane (both pictured right with Tommy Picthall) excitedly reporting, “My whole kindergarten class at Miraloma Elementary walked up Mt. Davidson to see where the Where the Easter Bunny Lives lives!” 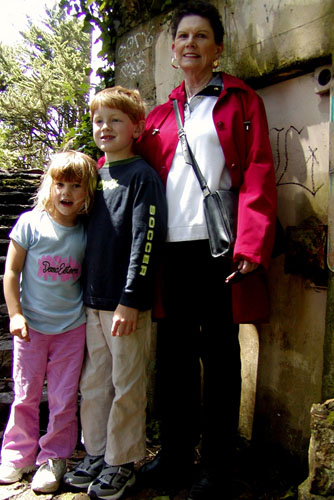 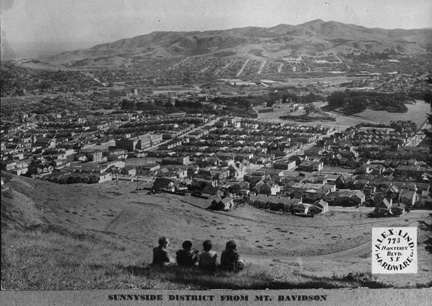 Because of Madie Brown whom “found beauty in flower and tree on this lofty hill. Through her untiring pleas, these acres have been set aside as a city park that all may enjoy their beauty and find refreshment of the soul.” Kids can still sit on the city’s highest hill today just like they did here in 1934. (Courtesy of Ron Davis.)