The “Grand Old Man of Twin Peaks,” Behrend Joost, was united in marriage in 1874 to Miss Anna Miller, a native of Wisconsin and of German descent (the Miller-Joost House remains on Market St.) Joost developed Sunnyside in 1891 with a fortune he made from a contract to dredge the Panama Canal. To get people out to Sunnyside “the Magnificent” he  started the city’s first electrical railway (SF&SMRR) from downtown through Sunnyside to the Baden stockyards in San Mateo County on April 27, 1892. The largest subdivision to date for San Francisco, it had 2,250 lots for sale along 48 blocks from the most southerly 200 acres of the Stanford portion of the San Miguel Rancho deeded to James P. McCarthy by Leland Stanford on Jan. 5, 1891. Rudolph Mohr was the secretary of the Sunnyside Land Co. Now situated between Glen Park on the east (where San Francisco used to end), Westwood Park and Highlands on the west (built in Sutro’s forest), and San Francisco City College on the south, the oldest neighborhood on Mount Davidson remains apart from the urban bustle. With quaint cottages and Victorians built or moved there as early at 1895 sprinkled among single family bungalows from the 1920s and 1950s, its hills provide interesting sights such as a row of steeply terraced front gardens on Staples Avenue and a street-turned-stairway on Detroit. Learn more about Behrend Joost at www.usgennet.org/usa/ca/state1/biographies/bjoost.html

The Sunnyside Line 10 still followed the original route of the San Francisco and San Mateo Railway (between Randall and Sunnyside/Monterey) after the railway was taken over by Southern Pacific. (See the railway and its powerhouse on the right.) (Courtesy Ron Davis.) 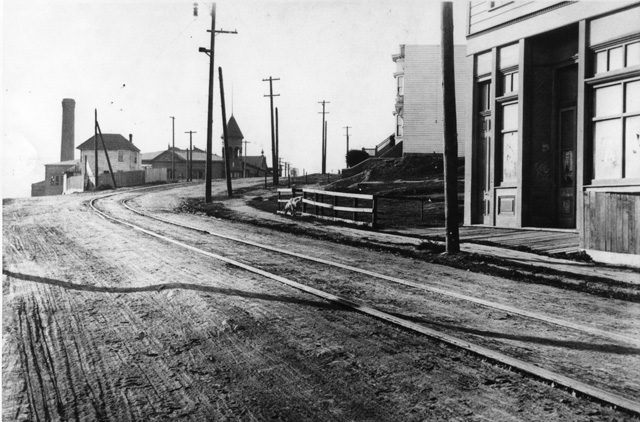 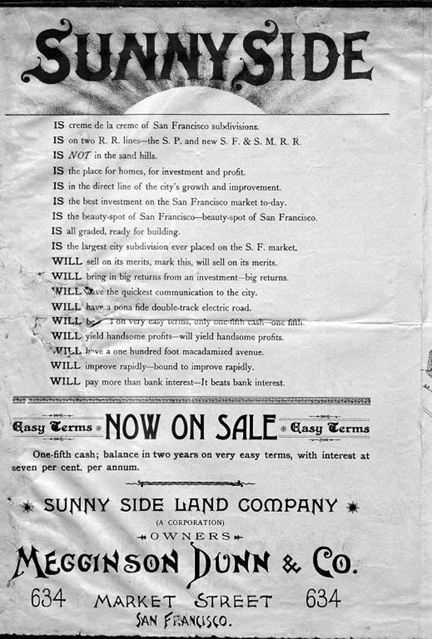 Behrend Joost named the streets in Sunnyside after millionaires: Flood, Spreckels, Mangels, and Joost himself. Behrend Joost, Claus Spreckels,  Claus Mangels, and his sister Anna Christina, were all from Hanover, Germany. Anna Mangels and Claus Spreckels were childhood sweethearts in Hanover and married in 1852. Anna’s brother, Claus Mangels, married Emma Zwieg. This is their house in Aptos (right). Claus Spreckels built a near identical house in Aptos too. Boxton-Zwieg builders later constructed  homes further west on Monterey Blvd. in Balboa Terrace, which includes a street and middle school named Aptos. Learn more about the Spreckels, Mangels, and Zwieg connections at http://www.santacruzpl.org/history/articles/407/. Spreckels Avenue was later changed to Staples. Another millionaire was added when Moulton was changed to Hearst. Weiland was changed to Judson, Milton became Marston, and Sunnyside became Monterey Boulevard. 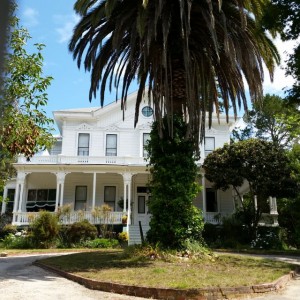 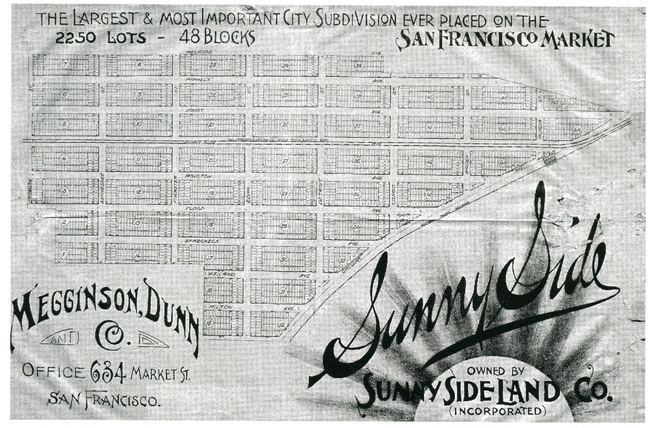 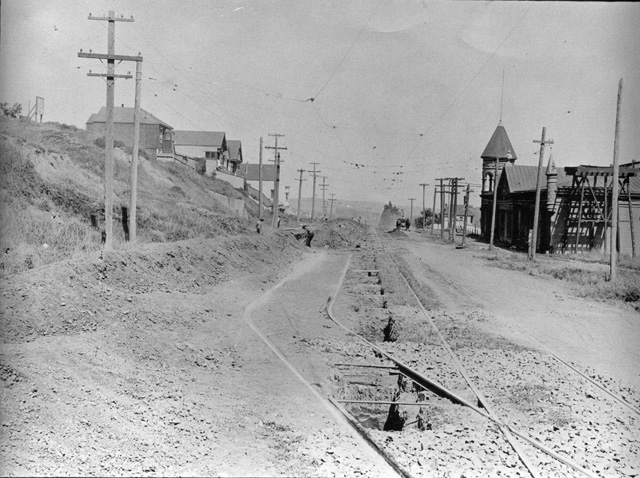 Construction work on Sunnyside Avenue east of Baden Street in 1914. The electric powerhouse for the railroad (built by Joost) is on the right. Sunnyside historian, Thomas Malim, writes “in 1920, the St. Francis Wood area was being developed, as were Westwood Park and Highlands. The developers and the early residents didn’t like Sunnyside Avenue running through their areas, so they petitioned City Hall to have the name changed to Monterey Boulevard. The residents of Sunnyside, led by Ernest Van Beck, (owner of the Sunnyside Conservatory) fought to retain the original name of the street, but the wealthy residents of those areas had more friends in City Hall and their power overcame that of their poorer cousins next door.”(Courtesy Ken Hoegger.)

A sunny day along Sunnyside Avenue near Gennessee in 1915. Behrend Joost expected the area to be developed into a site for weekend and summer homes, as it was then far from downtown San Francisco, and the area was sparsely settled by vegetable and dairy farmers. People of Irish, Italian and Mexican origin populated Sunnyside in the early days, according to lifelong resident Harry Mazza, whose parents bought the house next door to his Hearst Street home in 1910. When his mother baked bread in her backyard oven, she made extra for the neighbors. “Babies were delivered by the neighborhood women acting as midwives.” Mazza and his friends swam in a pond on Detroit Street. 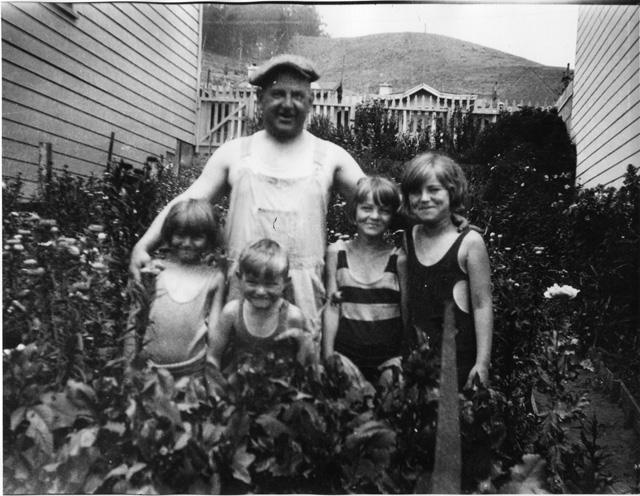 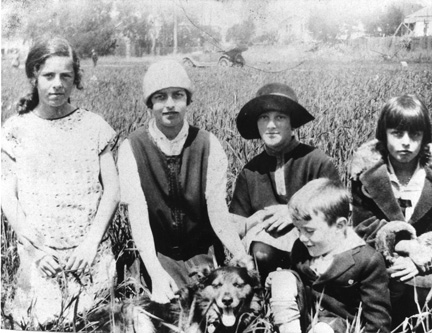 Monterey Boulevard becomes the new name of Sunnyside Avenue at Circular Avenue by 1921. Local historian Thomas Malim writes, “With the advent of Prohibition, Sunnyside, being sparsely settled and somewhat isolated from the city, (as seen by Jean Ward and friends in 1920s on Judson at Gennessee looking north) became a Bootlegger’s paradise. Swarthy men in dark suits and borsalino hats would rent a vacant house that was quite a distance from others. Stills were set up in basements and empty bedrooms, and the air of Sunnyside became redolent with the odors of fermenting corn, and all the other goodies that go into the making of a prime batch of grog.” (Courtesy Carolyn Wade.)

Mr. Peter Ward, next to his Case automobile in 1920, who bought the building at 199 Gennessee Street (now 189) and ran a market there. It sold vegetables and other grocery items and had a butcher section at the back. His grand daughter, Carolyn Wade, still lives across the street from the store in the home of her parents. (Courtesy Ron Davis.) 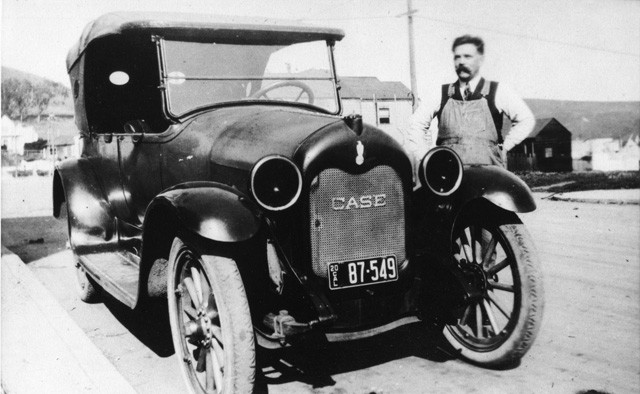 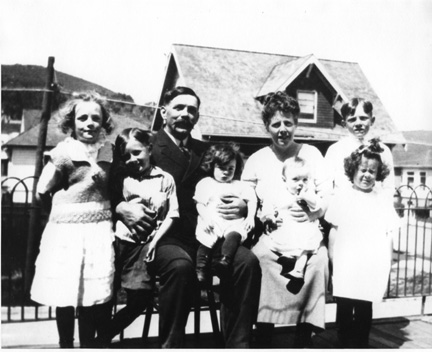 According to Malim, “Occasionally, some of the still operators would get carried away in the tasting of their own product, and forget to watch the boiler. The end result was a large explosion, and their heads suddenly cleared of alcoholic fumes, they promptly vacated the property. The sound of the alcoholic sonic boom in an area was the signal for all those nearby to rush into the empty bootleggers house and carry away anything that wasn’t screwed down. It is rumored that in one instance, two men came in with a pile of wet gunnysacks, and carried away the hot stove on which the evenings meal had been cooking.” This went on despite the County Sheriff’s House of Correction Number Three between 1874 and 1935 being nearby before it became San Francisco City College. (Courtesy Western Neighborhoods Project.) 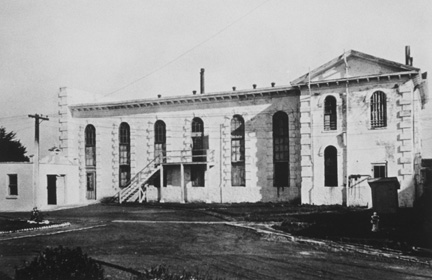 Old Sunnyside Elementary School, before it was remodelled with the current building, at 250 Foerster Street.(Courtesy Ron Davis.) 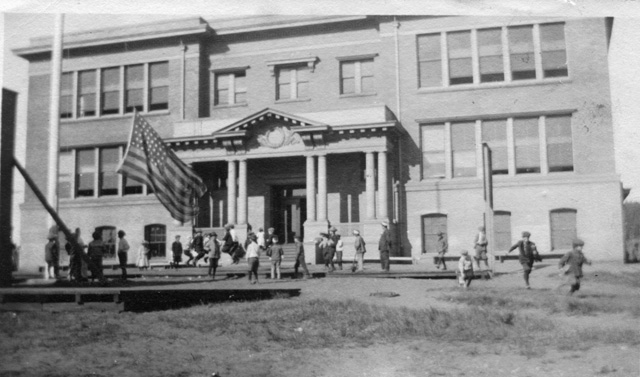 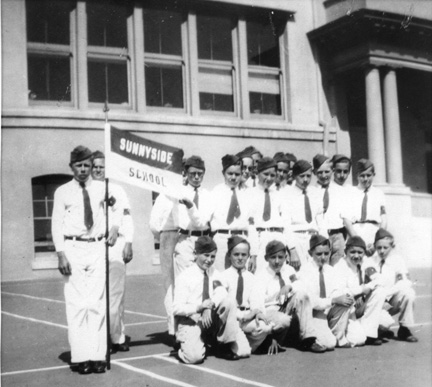 Residents bought shares in a Community Hall in 1925 at 620 Sunnyside Avenue, just west of Forester Avenue. 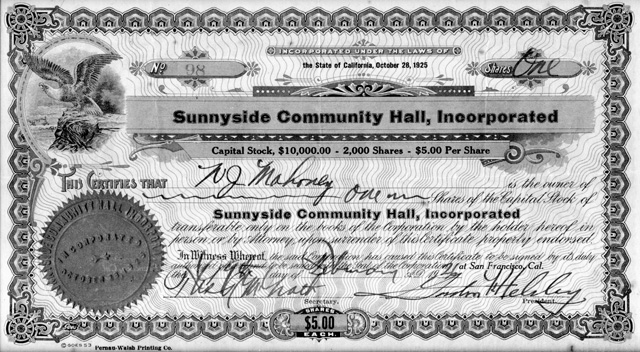 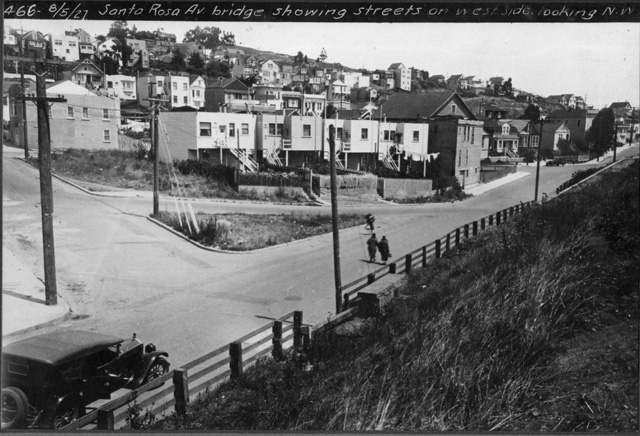 Santa Rosa Bridge view of Sunnyside District and Martha Hill in 1927. Malim notes, “On Saturday nights, the bean and rice sacks of the friendly neighborhood grocers were well stocked with bottles of the local product. It was not problem at all to reach down into the sack, shove the beans or rice aside, and produce a pint for four bits. That method of supply was strictly the property of the workingman. As this district was mainly settled by workingmen, they needed a little relaxation after six days of hard work. The more learned residents got theirs from a more genteel source, but it was the same booze.” (Courtesy Ken Hoegger.)

On May 11, 1928, the Knights of Columbus, West of Twin Peaks Council, had this picture taken in front of the newly built Saint Finn Barr Church (1) at Edna Street and Hearst Avenue. In 1926, the Parish held services in a storefront located at the present site of the Monterey Boulevard Safeway. Father Michale McLaughlin (2), hailing from County Tipperary, was the first St. Finn Barr pastor serving from 1926 until the mid-1930’s. (Courtesy Ken Hoegger.) 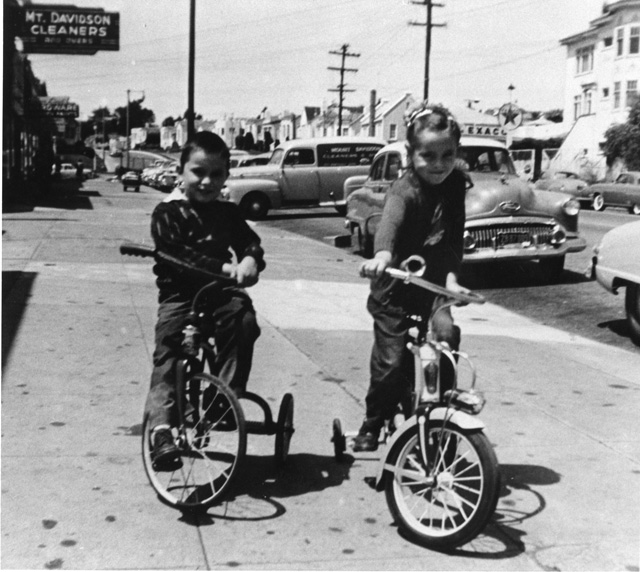 Monterey Boulevard in 1953 near Mount Davidson Cleaners. The former Texaco Station is in the distance at Ridgewood Avenue, whose name was changed from Hamburg Street around 1929. Named by Behrend Joost for a city in his native Germany, Hamburg maintained the east to west alphabetical progression of street names in Sunnyside. Malim writes, “the residents of Westwood Park and Highlands again joined forces and managed to have the name changed to Ridgewood, for the reason that Hamburg bordered their property, and the name wasn’t germane to the posts that heralded ones entry into the two Westwoods.”