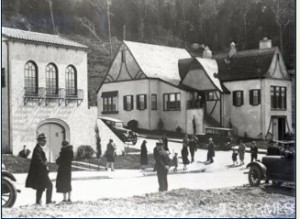 “The Raleigh” designed by Ruth Rowe

While notable architects such as Julia Morgan and Bernard Maybeck designed homes in nearby St. Francis Woods and Forest Hill, who were the designers of Miraloma Park homes? Since most pre-WWII homes in Miraloma Park were built in groups by the Meyer Brothers as “spec” houses rather than individual commissions, their designers are likely less well known and may be lost to history. It was unusual for a designer’s name to be publicized like the Meyer Brothers did in their advertisement for this home. Like nearby Balboa Terrace “spec” houses designed by architect Harold G. Stoner, however, many Miraloma Park homes feature unique details that seems to reflect the work of professional designers, as I recently discovered about 201 Juanita Way. The home’s Storybook style details of hand-hewn half-timbering, multiple gables, dovecotes, dormer and bay windows – some featuring unique mullions dotted with wood circles, are the work of Ruth Rowe, a designer for the Meyer Brothers. Inge Horton, the author of Early Woman Architects in the San Francisco Bay Area, recently shared her information about Ruth with me, including this advertisement for the “Miraloma Exhibit Home”.

Ruth Rowe was born in Iowa in 1893. According to the 1900 census, Ruth was the youngest of three children. Her father, William, was a farmer born in England. Her mother, Sophia, was from the Isle of Man. By 1910, she and her parents had moved to warmer climate in sunny Santa Barbara, CA. A decade later, she was living alone in Berkeley at 2039 Shattuck Ave and then moved to 3908 Cerrito Ave. in Oakland. She attended UC Berkeley in 1919, but did not graduate. Inge Horton notes in her study of female architects, The fact that she did not graduate explains that she worked as an employee and did not try to become a licensed architect. It had the advantage that she did not have to solicit commissions.” By 1924, she was working as a draftsperson for McWethy & Greenleaf and then the Meyer Brothers in 1927. Around 1930, she moved to Carmel, the home of many Storybook style cottages. More research is needed to find out what she did there before 1960, when, at the age of 67, she started working as a draftsman at Fort Ord. She died in Carmel in 1976 at the age of 83. 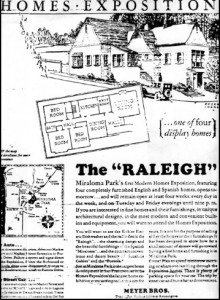 The Raleigh” at 201 Juanita Way was one of four Miraloma Park English and Spanish style “exhibit homes” built in 1927 by the Meyer Brothers for their “Modern Homes Exposition.” The four furnished homes were advertised to be open every day for at least four weeks, with late night openings to 9 PM on Tuesday and Friday evenings. The ad noted their unique architectural designs and the latest in built-ins and equipment such as a Kohler Electric dishwasher and a radio den. The “modified English” design of the “Raleigh” and the “Spanish Miraloma” models were described as a “trifle more pretentious and costly … in keeping with the natural beauty of the location and surroundings. (The adjacent forest on Mt. Davidson did not become a City park until 1929). The other two “Sunshine Gables” and the “Portola” featured “dainty beauty and compact convenience.” All four homes featured five rooms plus a social hall or playroom running the entire width of the basement.